The Rise of Superteams 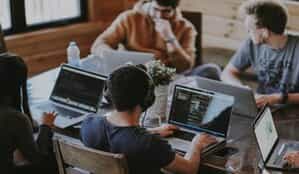 A superteam is not just a team of great people. It’s a great team in which members are connected through collective intelligence. The pandemic has thrown team dynamics up in the air so how can we bring together groups of people who can generate an exponential increase in performance through a healthy balance of collaboration, cognition and collective mindset? At the third and final webinar in our series, we asked our expert panel.

According to Microsoft’s Work Trend Index 2021, the time we spend in meetings doubled between January 2020 and January 2021. Instant messaging increased by more than 50%, especially out of hours, with a marked uplift in evening and weekend working. We may have experienced huge improvements in productivity - but it comes at a price.

Teams are working at unsustainable levels, increasing the risk of burn out. At the same time, transformation within businesses demands that the rapid pace of change is sustained. As a result, people are becoming exhausted and isolated with some groups feeling the pressure more than others.

While older workers, who have established networks and knowledge, are more likely to report they are thriving with new-found flexibility, younger workers are just surviving. As panellist Scott Adams noted, the productivity uplift we have experienced in the past year is masking a level of digital exhaustion.

“There is an ever-increasing appetite for more collaboration and the cost is exhaustion.”

This is where the concept of superteams comes in. As we explored with our panellists, these teams establish the right levels of collaboration, their composition is guided by data and analytics and as a result, they can deliver an exponential increase in performance without losing that feeling of being part of something great. Our webinar participants absolutely agreed that superteams are an important element of success too, with 94% of respondents believing that high performing teams are highly or extremely important to the fulfilment of strategic objectives. However, the group was less sure about how well prepared their business is for superteams to exist. 46% of respondents believe their business is very well or well set up. The remaining 54% said that they’re either poorly prepared to benefit from superteams or that they don’t know.

How to build a superteam

Digiworkz has grouped the makings of a superteam into five areas which we put to our panel during the discussion. Here we share their views on the neuroscience of, and data behind, the composition of teams that can go far beyond the norms of performance by adopting new ways of thinking.

We have to think outside engrained processes says Peter Nowlan “95% to 99% of thinking, even in leadership populations, is based on operational even though we talk about strategic”. This happens because leaders need to get things over the line, resulting in this style of thinking dominating the brain.

If you accept that it is possible for a team to perform a lot better than you do now, more than twice as well, then you must challenge the way you normally think, says Peter. We all have one brain that can play two games, but it can only play one game a time. Game2 thinking needs diversity, agreement, disagreement to break through engrained thinking patterns.

Only 10% of business leaders can thinking strategically and operationally, adds John, and not at the same time. Therefore, superteams need to be designed, not left to chance.

At Microsoft, Scott explains how insight from data is used to inform team composition rather than traditional methods like historic performance or just intuition. This is especially important in the context of remote working he says:

“People’s inclination is to work with their close network, people have become more insular and are engaging with their immediate team. Before, you had more opportunity for serendipitous connections in the workplace - you don’t have that opportunity now.”

The data that Microsoft uses to build better teams helps to identify people who are not necessarily managers or leaders, but those who have the capability for a role in a team such as being a great storyteller, articulating value, an ability to connect, to bring a diversity of views into a team. The platform’s knowledge network can also identify where Microsoft has expertise on projects, programmes, topics, where if this team was brought together with connectivity and diverse views, they could grow a superteam.

John adds that while it’s’ important to identify where people’s performance strengths are and to design teams with these combinations, it’s also critical to have control measures to mitigate risks and vulnerabilities. Future business needs to have the same mindset as teams of athletes he says, “To be able to peak and recuperate, to incorporate breadth and depth in knowledge, skills and experience.”

In addition to this, effective teams recognise that a balance is needed to spend your time wisely, says Scott: “People need collaborative working to get things done, they also need focus time to get deep work done. There is a trend towards ever increasing collaboration which is to the detriment of focus time.” Superteams collaborate but also make time to get the work done.

To visualise telepathic cognition, imagine a sports team, says Peter: “Look at a great sports team. They run rings round the competition, they think and move together. Passing, moving, connecting, out-thinking, this is collective intelligence”.

The richness of connections in the brain is coding different kinds of thoughts. The brain is extraordinary because of the way it connects, he says. Importantly, it’s the gaps that make the magic, just like with people. You need to work on the connection between people in a shared way – team thinking not all thinking at the same time.

“Alignment and agreement are overvalued; disagreement and challenge need to be balanced more strongly against them”.

To what extent do you put the scaffolding in place? Or do you just set great people off to go and make great things happen? Autonomy, mastery and purpose are the motivation for Game2 thinking, says Peter. The more freedom, the better the team, and in turn, the more freedom they should get. Outside control reduces effectiveness.

Empowerment requires a rethinking of ‘What is winning?’, says Peter. You can get teams to hit targets but winning isn’t just numbers. It’s also the feeling you get, and the feeling you give to others including your customers.

Scott adds that Microsoft’s research demonstrates the impact of managers not as a way of preserving hierarchy, but the way in which they enable autonomy. Managers have a role in helping people to stay connected, in achieving work life balance, guiding them in terms of understanding priorities.

Transferring energy into action requires us to be able to learn from mistakes, says John. A mechanism needs to be in place to extract lessons learned, to retrieve that knowledge and build it in continuous improvement or disruptive challenge in order to enter Game2 territory.

“To take forward learning from cognitive human heads to build and improve and grow greatness is a future aspiration”, he says. “But without a systemic flatter structure we are not going to get there”. Peter supports this point adding that a quicker decision-making cycle and getting collaborative feedback needs a flatter structure with less hierarchy.

In terms of how you can implement this type of action, Peter suggests that meetings are split into those for Game1 thinking and those for Game2 thinking. “Change the way we meet as a board. Double the meetings but half the time.” That’s certainly food for thought for all of us with full diaries of Zoom and Teams calls at the moment!

Thank you to all of our panellists for their input on this fascinating topic. As it’s the end of the first quarter of the year, we’ll pull the sentiments from our trilogy of webinars and we’ll share this back with you via our Insights series.

In the meantime, you can listen to the webinar again here.

The Rise of Superteams

A superteam is not just a team of great people. It’s a great team in which members are connected through collective intelligence. The pandemic has...

SuperTeams – Use of Cognitive Science To Create Exponential Team Performance

Behind every great transformation, there's an even greater team. But that team doesn’t need to be, and shouldn’t be, the same team delivering time...

Heads or Tails? Why Are Organisations Still Chancing Their Digital Luck